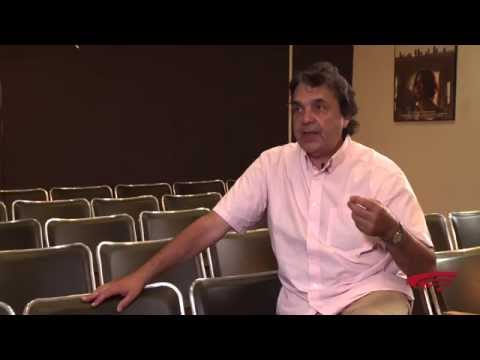 A film starts from an initial idea. Then, other ideas, and other images are added. The idea takes the form of a story and it becomes a scenario. Three people, the Scriptwriter, the Producer and the Director are the core team. The scriptwriter who is the "father" of the story, the producer who connects the artistic vision with society and the director who finds the way to narrate the story in a cinematic way.

Then, the artistic collaborators are added. Each one of them does his task but also extends the artistic vision. Actors, technicians and labs are added and start the preparation and shooting. The shooting is the "truth" of the film because during the shooting, the initial idea / the imagination either comes to life or it fails. Last step: editing, the sound design, the sound Mix.

Film distribution: Agony. Because what is the destiny of the movie if not to meet its audience? If not to be broadcasted in a full room watching silently, excited…?

Can the art of filmmaking be taught? In the five years of their study at the School of Film Studies, the young filmmakers are going to learn how to use codes from other arts to make better films, more substantial. Along this process, they are also taught the passion for the cinema.

In the cinema we narrate stories with animated pictures and sounds. We use codes from other arts: theater, music, painting, photography, dance...

Periklis Hoursoglou was born in Athens in 1955. He studied Mathematics at the National and Kapodistrian University of Athens and film direction at the L. Stavrakos School.

From 1976 until 1992 he worked as an assistant director next to several directors, and mostly close to Pantelis Voulgaris.

He also worked on the scenario, participating in the EU MEDIA Program workshops, while he taught in the Mediterranean Film Institute (MFI) workshops and in the Microfilm organized by Greek State Television.

From 2004, the year when the School of Film Studies was founded at the Aristotle University of Thessaloniki, until this day, he has been teaching classes in "Film Direction" and "Coaching Actors” and has been responsible for numerous workshops.

He has also taught at the Drama School of the NTNG.

His short and feature-length films have won numerous awards at festivals in Greece and abroad, national prizes and distintions.