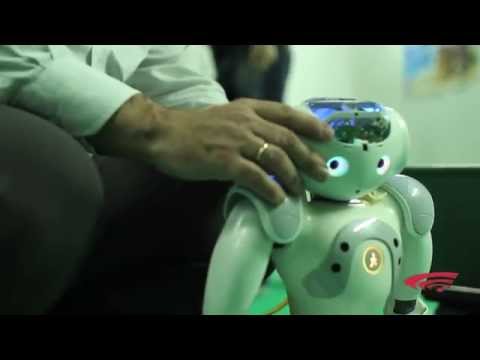 At the Intelligent Systems Laboratory of the School of Electronic and Computer Engineering at the Technical University of Crete, a research team named «Kouretes», which studies robotics and in particular the development of software for autonomous robotic systems, has been formed.

One of the activities of the team is the participation and research in the problem of robotic soccer. I.e., it studies the basic (open) problems of the research areas of environment perception, localization, motor skills, decision making, cooperation and autonomy, through its participation in the international RoboCup contest, where it has received important awards.

The software of the team offers a comprehensive software architecture, suitable for various applications of autonomous robotic teams. It is available online for free for non profit use and it is already being used in many universities for research purposes.

Team members are mainly senior undergraduate students preparing their thesis in a research topic related to the development of the robotics team software.

The aim of the RoboCup Competitions, in which the «Kouretes» team systematically participates, is to promote research in the areas of Robotics, Artificial Intelligence and Machine Learning. Robotic soccer encompasses all the basic research problems that must be resolved for future applications of autonomous robotic teams, such as rescue and research missions, planetary exploration or assisting in housework.

The «Kouretes» team owns five programmable, humanoid robots, which can be programmed to perform any desired behavior, manufactured in France by the Aldebaran Robotics company. At the same time, these robots have the ability to communicate and exchange messages via Wi-Fi in order to be able to cooperate and act as a team.

The research of the "Kouretes" team focuses on humanoid robots, as the long-term goal is for robots to adapt to our world and contribute to the needs of our daily life.

Besides studying and working on programming for robotic soccer, the team of the Technical University of Crete has also been challenged by programming robotic dance and storytelling, while the team’s expertise is already being exploited through a European research project, in the context of autonomous underwater robot team missions.

The “Kouretes” team has received:

Two awards in RoboCup 2008, in Suzhou, China, by the RoboCup Federation:

An award in RoboCup 2011, in Istanbul, Turkey by the RoboCup Federation:

An award in the Robotica 2013 international scientific conference , in Portugal:

- Best paper award for the article on the full Kinematics of the Nao robot.

Additionally, the team leader Mr. Μ. Lagoudakis has been a member of the Executive Committee of the RoboCup SPL since 2009 and was the co-chair of the RoboCup International Symposium in 2009. Both positions are considered to be honorary distinctions that were granted due to the success of the team since 2006.