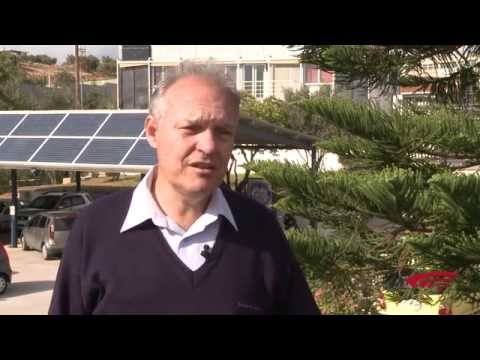 Geothermal energy is the natural heat from within the earth and it reaches the earth's surface through water, vapors and hot rocks.

There are three kinds of geothermal systems that are divided according to their temperature level and they can be used in a different way: that of low enthalpy (up to 90 °C), which is used for heating spaces, greenhouses, fish farms as well as in the production of drinking water, that of middle enthalpy (from 90 °C to 150 oC) which is used for heating districts, drying timber and agricultural products and in some cases for electricity production and finally, that of high enthalpy (> 150 oC) which is usually used for electricity generation.

Shallow geothermal energy is a special type with temperature lower than 25 oC arising from ordinary aquifers and rocks and can be used for heating / cooling using geothermal heat pumps, (e.g. in households).

The Centre for Renewable Energy Sources and Saving (CRES) develops technologies aiming at the geothermal energy exploitation with an emphasis on innovative systems of geothermal heat pumps.

The LOW-BIN project includes research, technology development and a demonstration of geothermal binary power plants. The research aims include the development of two binary power generating machines, the first one designed for geothermal fluids of 65-90 degrees Celsius for the market segment of low temperature geothermal power generation, and the second one designed for true cogeneration of heat and power with 120-150 degrees Celsius for the market of district heating.

It is estimated that the “LOW-BIN” solution will result in direct savings of at least 20 MTOE by the year 2030 and the prevention of emissions in the environment of 64 Mton CO2 followed by the creation of employment positions (direct/indirect) equivalent to 1,000 000 man/years. These numbers will increase dramatically when EGS systems will flourish, as expected, in the years after 2030. The commercialization of the product is already eminent, not only with hydrothermal, solar thermal, waste heat recovery applications but with its application in Enhanced Geothermal Systems (EGS).

This is the 3d prize awarded by the Energy Globe to the Centre for Renewable Energy Sources and Saving (CRES) for a project in geothermal area.

With more than 160 participating countries and over 1000 project submissions annually, the Energy Globe Award is today's most prestigious environmental prize worldwide. The aim of the Energy Globe is to raise global attention on sustainable, everywhere applicable environmental solutions and to motivate people to also become active in this area.