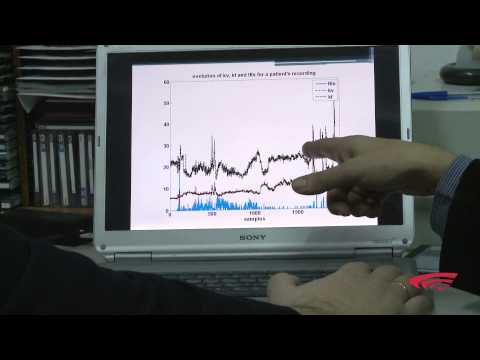 LIMITATIONS IN THE TREATMENT OF PATIENTS IN THE INTENSIVE CARE UNITS

Despite the development of technology in recent years, there are still major limitations related to the early diagnosis of a complication due to either the pathology of the patient or the therapeutic intervention. A lot needs to be done towards securing reliable prediction or the development of personalized treatments aiming at altering the body's inflammatory response.

The research of Dr. Vassilis Papaioannou, Assistant Professor of the Democritus University of Thrace, has focused on the study of the pathophysiology of sepsis, using the mathematical treatment of cardiac signals, such as electrocardiogram and blood pressure, as an indirect indicator of the activity of the immune system. It aims at continuous and real-time monitoring of the immunological profile of the critically ill patient, as there is continuous interaction between the autonomic and immune nervous system.

THE THEORY OF COMPLEX SYSTEMS IN PROCESSING INFORMATION IN ICU

Despite the considerable progress in understanding the biology of critical illness and the development of complex technologies for monitoring the vital functions of almost all organs, mortality remains extremely high and reaches 30-40% in the cases of severe sepsis and septic shock.

For this reason, a different approach to handling and responding to the information available is proposed, in order to lead the clinician into taking a timely decision.

In the context of research, mathematical tools are used for processing information collected by the monitoring systems of patients in ICU. The collection of information is continuous, takes place real time and is based on the theory of complex systems.

In this way, doctors can 'decipher' the hidden information which is not visible with conventional technology, in order to make timely and reliable predictions of possibly severe complication for the patient, but also to develop reliable prediction models.

At the same time the financial cost of diagnostic interventions is being reduced while diagnosis and treatment based on the particular complex physiology of each patient is becoming individualized.

Each year, the best research program concerning critical illness at a European level, is awarded an annual award by the Dutch (NVIC) & European Society of Intensive Care Medicine (ESICM). In the case of Assist. Prof. V. Papaioannou, innovative technologies of temperature signal analysis were used to differentiate the causes of sepsis during the first 24 hours of patients hospitalization in ICU and predict mortality.

Also, his thesis received the «2nd best paper award from the University of Pittsburgh, USA, Department of Critical Care Medicine, 2004, one of the top 10 departments in America, while his research received research grants after contests at both national and international level, by the Greek Society of Intensive Care Medicine in 2010 and the American Multinational Pharmaceutical company in 2011.

The development of medical informatics and its contribution to the promotion of "personalized medicine" shaping today the modern philosophy of intensive treatment in general, as described by the Assoc. Professor V. Papaioannou.