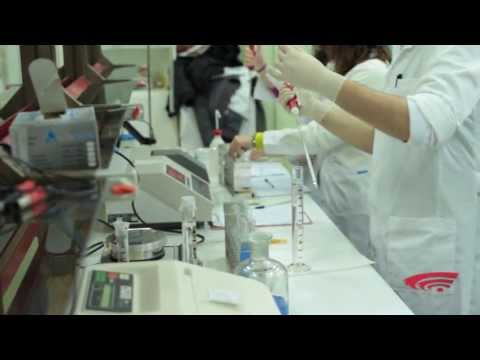 TARGETED DEVELOPMENT OF PHARMACEUTICAL SUBSTANCES BASED ON THEIR STRUCTURE

In the Biochemistry Laboratory of the Faculty of Veterinary Science of the University of Thessaly, the researchers are working in the field of targeted drugs development to treat diseases, such as cancer and arthritis, designing and studying molecules that fit into a particular type of protein.

The aim is to reduce toxicity and increase the selectivity of substances that can be used as future medicines. This signifies fewer side effects. These studies lead to improving the features of the already pharmaceutical substances.

Researcher Mr. George Kontopidis, Associate Professor of Biochemistry, with significant activity in the field of drug discovery is also the leader of the lab team. His work was awarded by the Bodossaki Institution in 2008 the award in field of Biomedical Sciences in the presence of the President of the Greek Republic.

Research on the inhibition of the multiplication process of cancer cells

Every function of the body is regulated by a specific protein. Thousands of proteins exist in the human body. So, if there is a dysfunctionality or a disease such as cancer, a protein is involved. The research identified as target-proteins the Kinase and Cyclase Α, involved in carcinogenesis and in particular in the uncontrolled cell proliferation. If this proliferation stops, then the disease is inhibited and can be treated. Each protein has a different configuration. So a molecule can be designed that will match this exact protein, like a key in a lock which locks and unlocks it. This part is the heart of the development of pharmaceutical substances.

The team in which Mr. Kontopidis was a member, discovered many molecules adding new atoms in each of them. In this way, the potency of substances was improved by thousands of times. Thus, by replacing one of the 20 atoms that consist the molecule-drug, the potency can be altered 10.000 times.

The ultimate goal is for it to be a perfectly match, have no side effects and as soluble as necessary to be able to cross cells. The research is already trial tested in patients with lung cancer and leukemia.

The chemist Dr. George Kontopidis, excelled in the field of Biomedical Sciences and received an award by the Bodossaki Institution in 2008.

The institution of scientific awards was created in 1993, in the context of the charitable aims of the Bodossaki Institution, emphasizing on education and supporting all the Greek scientists, aged up to 40 years of age, in recognition of their creative work. The awards are accompanied by an amount of 22.000€ per winner, to financially support Greek scientists and reward them for their constant and consistent endeavor to promote science.