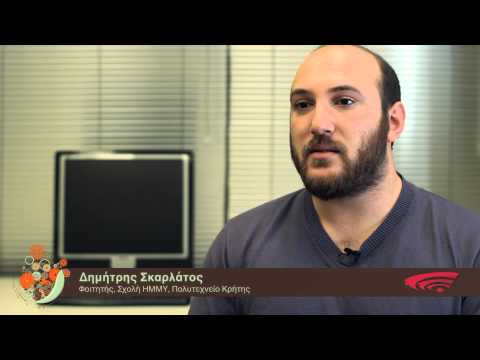 FPGA technology (Field Programmable Gate Array) is a technology in which integrated circuits, made from the same technology as the processors that we use in our personal computers, have got "an open in changes interconnection", which allows algorithms visualization directly on the hardware, instead of having a "standard interconnection".

The logic gates and their interconnections are placed in such a way, so that an integrated circuit can be used either as a network processor, or as an image processor or in a different way.

Dimitrios Skarlatos, George Mantakos and Athanasios Stratikopoulos, undergraduate students of the 5th year of the School of Electronics and Computer Engineering (ECE) at the Technical University of Crete, under the supervision of Professor Apostolos Dollas, used FPGAs to create graphics from flames, using repetitive functions "fractals", and won the first prize at a European contest in 2013.

This application is the first international announcement where FPGA technology is used on real time fractal flame rendering (displayed on an HDMI monitor) by a relatively small FPGA integrated circuit. This application runs several tens of times (up to 100 times) faster than the corresponding application in a conventional, multicore processor.

The design was made by using iterative functions (the kind of functions known from fractal images) and has been carried out in the framework of an advanced course in the design with FPGAs taught in the 5th year of the programme, under the supervision of Professor Apostolos Dollas.

The students of the Technical University of Crete modeled the algorithm in MATLAB language so that issues such as the calculation accuracy, calculation error, etc. to be checked under the constraints of the FPGA technology and then they created a parallel architecture to run the algorithm quickly and efficiently.

This is a first result in this field and indicates that the FPGA technology is appropriate for such calculations.

ALTERA Europe-Wide Design Contest, Most Impressive Use of an FPGA Category 2013

The first place and the corresponding prize in the Europe-Wide Design Contest with FPGA (Field Programmable Gate Array) technology, in the category "most impressive use of an FPGA" has been earned by Dimitrios Skarlatos, George Mantakos and Athanasios Stratikopoulos, students of the University of Crete, under the supervision of Professor Apostolos Dollas. The competition was launched by the ALTERA company and was open to students of all levels from European Universities and research institutes. The award ceremony and the demonstration of the system was held in September 2013 in Porto, Portugal, within the framework of the 23rd International Conference on Field Programmable Logic and Applications, of the largest international conference of the FPGA scientific area.

Supervisor: Apostolos Dollas, Professor and Dean of the School of Electronic & Computer Engineering.