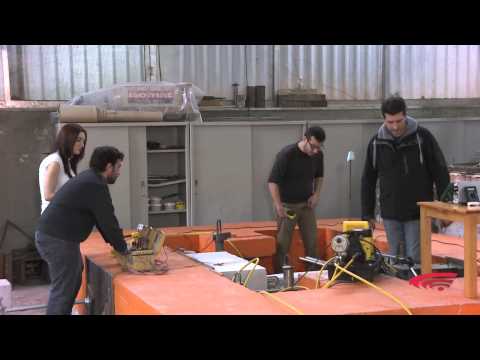 The superposition of beams and columns, known as nodes, are considered to be among the most critical components and it was proved that they are responsible for numerous injuries, even collapses, in every major earthquake. The prevalent ignorance of their intensive situation, led for many years to poor designs, resulting in the bad and extremely dangerous seismic behavior of the corresponding buildings.

Professor A. D.Tsonos of AUTH developed a new and effective model that contributes significantly to life protection, by ensuring the integrity of those who live both in old and new structures. This model, known as the "Tsonos Model", was originally developed to meet the needs for design nodes of anti seismic of reinforced concrete structures in detail. Thus, the aim of modern building regulations, which is to transfer the damage from the node to the beam, in case of a strong earthquake, is implemented with the help of this model. This damage in the beam is not dangerous since the building collapse is avoided in this way.

Another invention of the professor concerns a new system for strengthening buildings against earthquake with reinforced concrete structures, and was awarded another patent by the Industrial Property Organisation (OBI), in 2007.

"Tsonos model" instructs the accurate design of the nodes for anti seismic constructions from reinforced concrete. This model offers many other key services: It can save lives because it detects errors made when calculating initial building parameters, even following modern regulations, which may lead to crashes. It is a mathematical model that uses 13 equations and it can predict the behavior of the node in an earthquake. The powerful forces developed during the earthquakes cause significant damage to the nodes which may lead to the collapse of the building. With this model, in the case that the forces at the nodes are kept low, lesions are diverted to beams thereby preventing the building collapse. The accuracy of "Tsonos Model" has been globally recognized and it has been presented by Professors of the University of California at Berkeley as one of the two most reliable models. The fact that the "Tsonos Model" is being recognized by leading scientists in the field of Civil Engineering and that its accuracy is being compared to their own scientific approaches, has been an honor to Greek science and research in the area. The Science Prize "OIKOPOLIS 2012" was offered to Professor A. D. Tsonos (on the right of the picture), by the Minister of Substructures, Transport and Networks at the time, the Rector of the National Technical University of Athens, Professor S. Simopoulos.

A new system of seismic strengthening of reinforced concrete buildings

In September 2011, Professor Alexandros-Dimitrios Tsonos was awarded a prize by the Rector of the AUTH, Professor I. Mylopoulos on the occasion of the international recognition of his model for avoiding collapse of reinforced concrete constructions.

Furthermore, the science award “OIKOPOLIS 2012” was awarded to Professor A. D. Tsonos for his study and research, which has led to the development of his model. The model was considered as the top scientific study, with respect to the protection of the environment and especially for the protection of the constructions, according to the rigid criteria of the Scientific Evaluation Committee for assessing the institution.

In October 2007, with the Patent No. 1005657 by the Industrial Property Organisation (OBI) Professor A. D. Tsonos fortified his invention about the new approach for strengthening buildings against earthquakes with reinforced concrete structures.