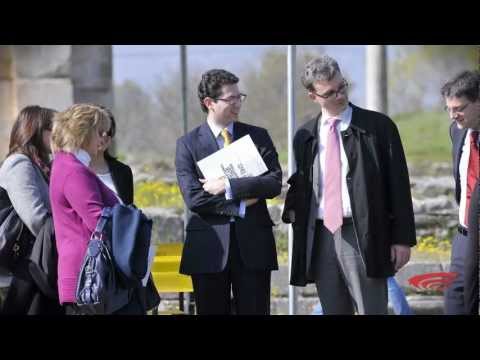 For the third consecutive year, the 3d International Roman Law Moot Court Competition was held in the ancient Agora of Kavala (forum romanum) in March 2010, under the academic organization of the University of Oxford.

The purpose of the contest was to promote fair competition among European students, on a historic site bearing an important symbolic significance. Forum romanum, was the administrative centre of Philippi and was a place were trials were conducted during the Roman era.

The competition was attended by the students of eight distinguished law schools: the University of Oxford, Cambridge, Trier, Tubingen, Liege, Vienna, Naples and the National and Kapodistrian University of Athens.

The law school of Athens excelled twice in the competition. The team was awarded the first prize while the student ‘Artemissia Papadaki’ also won the Best Oralist Award among all the contestants.

A fair distinction for the Law School of Athens

The subject of the competition was Roman Law, which constitutes the foundation of civil Law in European countries and acts as common ground among the Law Schools and allows fruitful competition between students in the context of a complex civil law case. The Committee of Judges consisted of Professors of University contestants.

In total, thirty two students spoke in English, citing the codification of Roman Law in two cases taking place at the 6th a.d. century, in Constantinople during the era of Justinian, but their subject couldn’t be more contemporary.

The first case involved a purchase and sale agreement which has many common features with commodity swap contracts and the second raised the issue of the personal affront.

The competition at the archaeological site of Philippi, promotes the cultural heritage of Greece, while giving the opportunity to European Law school students to become familiar with the main concepts of ancient civil law, which is also reflected in the modern legal systems.

The competition was held under the auspices of Mohamed Ali Institute for Research in the Eastern Tradition. The UoA Law School team was awarded the first prize in the Roman law moot court competition. Beyond the distinction of the team, the student ‘Artemissia Papadaki’, won the Best Oralist Award, among all the contestants.

NATIONAL AND KAPODISTRIAN UNIVERSITY OF ATHENS