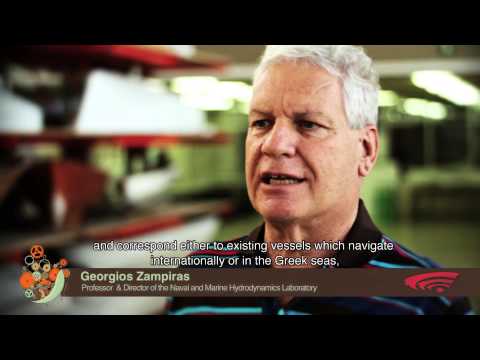 Some of the research interests of the Ship Design Laboratory at the National Technical University of Athens, led by professor Apostolos Papanikolaou, are the studies on the behavior of ships in different waves, sinking simulations after a possible accident, innovative designs of original ships.

Professor A. Papanikolaou and his research team have carried out more than 60 research programs in the fields of hydrodynamics, ship design and operation, safety, risk analysis and the development of regulations and standards.

For the significant research work and his contribution in shipbuilding, Dr. A. Papanikolaou was awarded “The Davidson Medal” in 2011, an international award, which consitutes the highest distinction in the field of Shipbuilding, awarded only for the second time to a non American scientist.

The Greek legend of Shipbuilding

THE RESEARCH WORK OF PROFESSOR A. PAPANIKOLAOU

Apostolos D. Papanikolaou was born in Athens in 1949. He studied Naval Architecture & Marine Engineering at the Technical University of Berlin, where he graduated from in 1973. He fulfilled his postgraduate and doctoral studies at the same University in the area of shipbuilding and marine engineering. He has worked as curator and Lecturer at the Technical University of Berlin, as Associate Professor at the University of Hawaii and as visiting professor in Japan, Germany, the United Kingdom and the USA. He was elected Associate Professor at NTUA in 1985 and was promoted to full professor in 1988. He has been Head of the Ship Design Laboratory since the date of the foundation of the Laboratory in 1990.

His research activity is reflected in over 470 publications and in the writing of seven books, while the main area of his contribution is the holistic ship design and safety optimization. He was the main researcher of NTUA in the “Safedor” project, for which he won the research innovation prize of Lloyd’s List, together with the German Classification Society, in 2009. He is a member of the main shipbuilding associations in the world, including the biggest of all, the “SNAME” American Association. His research in the development of holistic methods for ship design and safety is what made a difference, according to professor A. Papanikolaou, in comparison to the other candidates for the “Dr. K. Davidson” award of SNAME.

Professor Apostolos Papanikolaou of the National Technical University of Athens was honored in November 2010, in Seattle of the USA, by the 8.000 members of the biggest international association of shipbuilders and naval engineering in the world, the SNAME (Society of Naval Architects and Marine Engineers), with “The Davidson Medal” prize, for his contribution to the shipbuilding science. This prestigious prize in honor of “Dr. K. Davidson” is considered as a corresponding “Nobel Prize” in Shipbuilding and is attributed to scientist every two years since its establishment, in 1959, as a recognition of their accomplishments and contribution in ship research. Professor A. Papanikolaou is the first Greek and second non American scientist since the introduction of the award, who achieves this distinction in the history of this particular institution.

In April 2014, he received a new honorary award at EU Champions of Transport Research competition in the Waterborne Transport category. The awards ceremony was held in the framework of the EU Transportation Research Conference TRA2014.