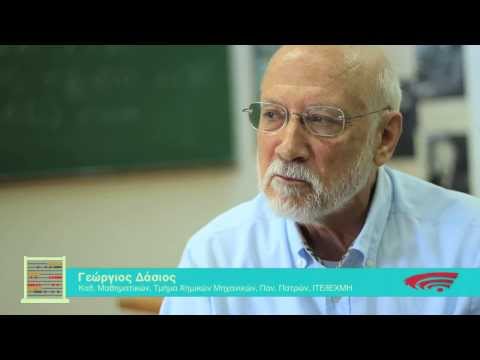 Older and modern forms of art such as architecture and sciences, medicine and biology, the philosophy of language, mechanics and statistics are directly related to mathematics and «logic» in the mathematical process.

This eminently frugal and strict subject brings together distinguished scientists around the world who seek to substantially understand the introduction of a mathematical theory in approaching real problems.

mathematical analysis of Electroencephalography and Magnetoencephalography, the results of which are particularly useful and beneficial in non-invasive diagnostic medicine, confronts a real problem.

This was also the research area of the Chair of the Department of Applied Mathematics and Theoretical Physics of the University of Cambridge offered to Professor George Dassios during the years 2005-2008, in the context of the European program Marie Curie.

Marie Curie Chair of Excellence at the University of Cambridge

One of the 16 Chairs of Excellence funded by the European Union worldwide and across all disciplines, in the context of the Marie Curie program, was offered to the professor George Dassios for the years 2005-2008. The research content of the chair was the mathematical analysis of Electroencephalography and Magnetoencephalography.

More specifically, the research conducted in collaboration with professor Athanasios Fokas, involved exploring part of the neuronal current that can be detected during a cerebral activity, as well as the development of mathematical algorithms with which we can identify this activity. The three-year collaboration with Professor Athanasios Fokas led to the complete demarcation of the possibilities provided by the Electroencephalography and Magnetoencephalography brain scans. These techniques are the only ones that can respond to the study of brain function, due to the high temporal granularity they pose.

Mr. George Dassios, received for the years 2005-2008, the honorary "Marie Curie Chair of Excellence", in the Department of Applied Mathematics and Theoretical Physics of the University of Cambridge with E.U. funding for the research associated with the electromagnetic brain activity, as well as with the theory of generalized conversions, as introduced by A. Fokas και Ι. Gelfand.

In 2004 he was honored with the "Ar. Pallas Award" of the Academy of Athens along with Dr. Fotini Kariotou for the scientific publication in the “Journal of Mathematical Physics” entitled "Magnetoencephalography in ellipsoidal geometry". In addition, he was head of the "PANEGKO" project, co-financed by the EU(1992-1996), that conducted basic research in early diagnosis of cerebral edema from head injuries and in identifying biological particles in a fluid environment and excelled as a project of best practice.

Theoretical and applied mathematics: Where do they meet and how do they collaborate? What is their common goal? Scattering issues: what does ‘scattering’ mean and how is it connected to medical imaging? Discussion with Prof. G. Dassios.