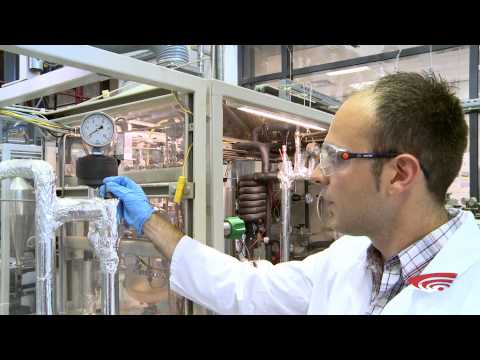 Used cooking oil is a "problem" in our days since disposing a single litre is enough to contaminate one million litres of water, the quantity which is used by an average man in 14 years! However, the Centre for Research & Technology Hellas (CERTH) (ΕΚΕΤΑ), has developed a new technology which seems to be a promising solution not only against climate change, but also as far as the disposal of cooking oil is concerned.

This technology manages the production of biodiesel from used cooking oil based on catalytic hydroprocessing of used cooking oil and converting the fatty acids into paraffins and naphthenic. The overall process has a high degree of conversion exceeding 90%. The new biofuel is a light and clean diesel with remarkable properties. Compared with conventional fossil diesel, it has got a higher cetane number and higher calorific value, thus less fuel consumption per km.

Two tons of the new fuel has been produced and pilot tested on one of the garbage trucks of the Municipality of Thessaloniki with the co-funding of the European Program LIFE +.

The new technology can exploit the used cooking oil by 100% to produce 2nd generation biodiesel and is innovative at an international level. Compared to first-generation biodiesel (which was quickly associated with the controversial debate "energy or food", which restricted its development), the new technology is more economical and durable, since it can exploit the large quantities of available used cooking oil for the production of an economic biofuel under stable standards, which does not require engine modification.

The technology has been developed to maximize diesel yields with the lowest possible operating cost. It has explored the optimal catalyst and optimal operating conditions to ensure maximum performance without compromising the quality of the produced biodiesel. Moreover, new technology incorporates hydrogen produced from solar energy to cover some of the needs in hydrogen. It is for this reason that CERTH installed a photovoltaic power station through a 10kW electrolyte which will convert solar energy into hydrogen.

This technology is of great business interest and provides significant environmental benefits. Interests have already been expressed from the States (USA) and China.

For the innovative technology of biodiesel production from used cooking oil, the research team of Dr. Stella Bezergianni of the Chemical Process Engineering Research Institute (CPERI) of the Centre for Research & Technology Hellas (CERTH) won the second prize (July 2011, "Hellenic Cosmos", Athens) in the category "Innovation" in the "Greece Innovates" competition, co-organized by the Hellenic Federation of Enterprises and Eurobank EFG.

More than 290 candidates, 92 of which scored above average and 21 of which made it to the final stage, were involved in the competition.