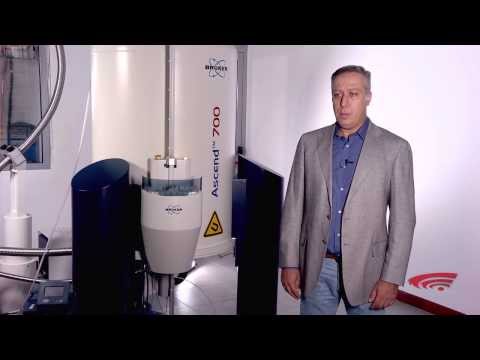 NEW APPLICATIONS IN THE STUDY OF BEHAVIOR OF BIOMOLECULES, BY NMR SPECTROSCOPY

Spectroscopy is a branch of physics and particularly a branch of wave optics and deals with the study and research of the structure, composition and properties of the Spectra and various radiations as well. It derives from the Newton’s experiment who was the first who managed to take a spectrum of sunlight, in 1668, by inserting a transparent prism in the light beam path.

Today, the research team of the Department of Pharmacy, at the University of Patras, is active in the study of the conformational properties of proteins, potentially pharmaceutical, targets through multi-dimensionals and homo/hetero-nuclear NMR spectroscopy in solution. According to this, when the atom nucleus possessing a nuclear spin under the influence of a strong static magnetic field, they are irradiated, they are stimulated and they resonate at a certain frequency providing a characteristic signal during their irradiation.

NMR spectroscopy can be applied to isotopes whose natural abundance is big enough to be detectable.

The research activity of the team

To enrich proteins in 13C and 15Ν >98% isotopes (natural ratio of 1.11% and 0.37% respectively) and/or in 2Η in a proportion of 70-98%, the research team uses molecular biology methods. NMR Spectroscopy (Nuclear Magnetic Resonance), is a reliable method for calculating three-dimensional structure of biopolymers, in solution (peptides, proteins, DNA/RNA, etc.) with atomic analysis comparable to that of Χ-ray crystallography.

NMR spectroscopy excels other spectroscopic methods, because it can offer in a quantitative way the relative position of atoms in space and study the formation of a biopolymer in its natural environment (solution). The method is also distinguished for its ability to study a variety of a dynamic phenomena, such as the mobility/flexibility of biomolecule, the interaction between two biomolecules, the chemical exchange etc.

The team of the Department of Pharmacy of the University of Patras applies these approaches to studying the structure, dynamics and interaction of proteins with tumor suppressor activity, of membrane receptors which are involved in neurodegenerative diseases and enzymes which cause bacterial/viral infections, carrying ions/e– etc. Thanks to its recent activities in the NMR biomolecular field since 2013, the University of Patras has acquired and installed a modern NMR Spectograph, 700 MHz, equipped with a cryogenically cooled probe, suitable for high molecular weight protein studies (>25 kDa), unique in Greek academia.

European programs of the team of the Department of Pharmacy from the University of Patras, which have excelled:

» FP4 - Marie Curie Research Grant 1997-2000 & 2000-2001, NMR Spectroscopy to study the structure, the dynamics and the folding/unfolding process in Paramagnetic Metalloproteins, such as Cytochromes .

Additional information by Prof. G. Spyroulias on the advantages of NMR spectroscopy in contrast to other spectroscopic methods and/ or methods clarifying the three-dimensional structure of biomolecules.