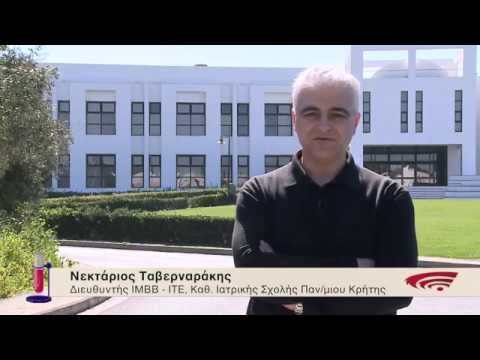 THE BIOLOGICAL MECHANISM OF AGEING

Ageing and the pathological situations that go with it (neurodegenerative diseases, cancer, heart diseases etc.) constitute one of the ever increasing human disability factors in modern societies. The mechanisms which are responsible for the ageing of the cells as well as of the entire organism are not yet fully understood and therefore neither are the ways in which these mechanisms can be controlled.

The research activity of the research team at the Laboratory of Neurogenetics and Ageing, of the Institute of Molecular Biology and Biotechnology of the Foundation for Research & Technology-Hellas (FORTH) led by the Director of IMBB and Professor at the Medical School of the University of Crete, Dr. Nektarios Tavernarakis, focuses on the elucidation of the basic molecular mechanisms of ageing, necrosis and the necrotic cell death in neurodegeneration. Furthermore, the team focuses on the mechanisms used by the nervous system to understand and processes stimulations from the environment.

The decoding of the biological mechanisms involved in ageing, will enable the development of effective interventions for the improvement of the quality of life in elderly.

Detection of the basic molecular mechanisms of ageing, necrosis and the necrotic cell death in neurodegeneration

The experimental system used by the research team of the Laboratory of Neurogenetics and Ageing, at the Institute of Molecular Biology and Biotechnology (IMBB), for the investigation of the molecular basis of neuronal ageing, in the framework of the research program “NeuronAge”, is the simple nematode Caenorhabditis elegans.

The team exploits the advantages of C. elegans to investigate ageing, the neuronal cell function, as well as the causes and mechanisms that influence necrotic cell death in neurodegeneration.

The aims of the NeuronAge research program are multiple and include the development of a microfluidics platform for high-throughput manipulation and imaging of specific neurons in living C. elegans, as well as for the monitoring of the neuronal function during ageing.

This specific research is crucial for the understanding of mechanisms causing the human nervous system to get older, resulting in serious neurodegenerative diseases, such as Alzheimer's and Parkinson's.

Dr. Nektarios Tavernarakis, professor of the Medical School of the University of Crete and Head of the Neurogenetics and Ageing Laboratory at the Institute of Molecular Biology and Biotechnology of Foundation for research & technology-Hellas (FORTH), has earned over the years, significant research funding and awards:

- Research Excellence Award of Foundation for Research and Technology (2007).

- Academic Prize in Medicine and Biology of Bodossaki Foundation (2005).

FOUNDATION FOR RESEARCH & TECHNOLOGY-HELLAS (FORTH)

Dr. Nektarios Tavernarakis, Director of IMBB - FORTH & Professor at the Medical School of the University of Crete.

Laboratory of Neurogenetics and Ageing, Institute of Molecular Biology and Biotechnology, Foundation for research & technology-Hellas (FORTH).